The Masters & Leadership programme is an AMAZING programme that WILL improve you or your child’s life! Guaranteed!

Bold statement but very true. If you are reading this, you are currently enrolled onto a trial membership programme at our Martial Arts school and have been shortlisted or shown a desire to train to Black Belt and beyond. You may have even been invited to apply! Well done for wanting to live the Black Belt lifestyle. We only choose families who we want to work with to Black Belt and beyond so congratulations on being chosen to apply.

Enrolling onto the ‘Masters & Leadership’ Programme you understand is a long-term commitment and not a month to month or seasonal activity approach. Please spend at least 30 minutes looking at this page, committing to becoming a Black Belt is a worthwhile investment that needs your attention. You need to decide that training to Black Belt and beyond on our Masters & Leadership programme is 100% for you and your family. Students must show their Sensei’s (& their parents) that they deserve to qualify for Black Belt Training. We only want to work with committed families not those who cannot see the true value of becoming a Black Belt with our Martial Arts school.

If you are truly serious about becoming a Black Belt, then you need to do the following;

– Watch EVERY video on this page

– Read EVERY piece of information on this page

– Download and Read EVERY downloadable piece of information on this page

We have many more testimonials, just ask a member of the team to see more if you are not already convinced on the amazing value of the programme.

Why achieving Black Belt is worth more than a million pounds.

As you can see, I have attached a “million pound note” to this page. Why have I done this? Actually, there are 2 reasons

I have something very important to tell you, and I wanted to be sure I got your attention.
I’d like to share a very important story – that is directly related to £1’000’000 and I thought it would be a great way to “break the ice”

For many years now, Kaizen-Do Karate has held a semi-annual grading with all our Black Belt and Black Belt candidates. It is attended by many participants.

An annual ritual has become – sitting down the new Black Belts and asking a simple question.

Now, you’ve got to suspend disbelief for a second on this one…
What if I possessed a “time machine” and could transport back to the moment that you decided to commit to Black Belt (and beyond) at Kaizen-Do Karate. What if I could travel back – and while travelling back take back all of the skills, knowledge, attitude, friends, and accomplishments that you’ve achieved on the way to Black Belt?
If I had that ability – how much would I have to pay you to allow me to take away all the accomplished due to your association with Kaizen-Do Karate?
Well often there is a stunned silence among the participants – and their parents.
Then I ask – what if I reimbursed 100% of everything you ever paid in tuition, events, equipment – if I reimbursed everything that you’ve paid – and even paid £25 or even £50 per hour for the time you’ve spent? Would you take me up on the offer?
In every instance – Literally 100s of times the answer is a RESOUNDING – NO WAY!

What do you think over 100 Black Belts and their parents – have Unanimously said to that proposition?
£1’000’000 just to have decided NOT to train to Black Belt at Kaizen Do Karate?
Can you guess? Well you’re right.
Every one of them in the last 12 years have said not only NO- But NO WAY! Each and every Black Belt ever developed at Kaizen-Do Karate had said the experience was not only worth £1’000’000 but literally was PRICELESS!

Now you may be thinking one of two self-defeating ideas.
First, well that’s them. How do I know that I’ll be able to achieve Black Belt under the incredibly high standards of Kaizen-Do Karate?
Well, frankly each of our Sensei’s are trained for 100s of hours – on the teaching and development skills necessary to achieve Black Belt. And they have all been taught how to check for aptitude and attitude for a strong Black Belt candidate. And, to qualify prospective candidates to be allowed to train to Black Belt and beyond. Not everybody is allowed to train to Black Belt.

You have passed a VERY VIGOROUS screening process to be considered to train to Black Belt and beyond – and to earn the Internationally recognised symbol of achievement in Martial Arts – Kaizen Do karate’s Black Belt. Not all students are considered to train to Black Belt (students who are considered still need to pass the application process).
Second, ok, ok – they all achieved those incredible results – but, for me it just seems like too much time, effort, and money. Why would I want to do this?
Well – you’re right about one thing. Without commitment there is no achievement.
Is it worth the time, effort and money? Well ask any Kaizen-Do Karate Black Belt and you will find that they believe their achievement to be worth 100 times or even 1,000 times what it cost them in time, effort, and in money. Without exception – they believe that no other use of their time and resources would have had the same –life-long, permanent, improvement in their life that Kaizen-Do Karate has had.

Anyway – why have I written to you this week – and explained our Black Belt system at great length?
Well, this month you have been evaluated by your instructors and they have unanimously approved you to be accepted into the Kaizen-Do Karate family of Black Belts. Work hard to pass the application process.
I’m hoping that you will take the time to sit down with our expert staff (probably me) this week to discuss the specifics of our Masters & Leadership Programme so that you also may be allowed to train to Black Belt (and beyond!)
As I’m sure you know – I first work with most Kaizen-Do Karate students during the Black belt preparation cycle and during the Black Belt gradings.
Honestly, I hope to personally work with you in 2½ to 3 years – and sit and ask you “What if I has a “time machine” and could travel back intime and……(you know the rest)

p.s.You need to hand in your application form no later than 2 weeks after being awarded the pack. Please call the School today and ask to book an appointment with me if you wish to discuss either the Masters & Leadership Programme.
p.p.s. you have done VERY WELL to be considered to train to Black Belt – I wish you luck in your application.

What is the Masters & Leadership programme?

The Masters & Leadership programme is an AMAZING programme that continually evolves and improves.Our ‘Masters & Leadership’ programme aims to create the leaders of tomorrow. Our team of Sensei’s will develop the student’s physical skills, character levels and self-discipline to a whole new level. We want to ensure the students on this programme strive to become more successful at primary school, secondary school and set themselves small, medium and long-term goals. For students wanting to go to college and university the ‘Masters & Leadership’ Programme will teach them more about Determination and Perseverance. The programme is not just for juniors though, adults can still benefit from topics such as goal setting, determination, and how to be more successful at work or in their career
You need to download this document and have a thorough read of the elaborate programme. Do not think that your child is too young for it or likewise that you are too old for it. This programme takes Personal Development & Leadership to another level. Remember what we said at the start; The Masters & Leadership programme is an AMAZING programme that WILL improve you or your child’s life! Guaranteed! 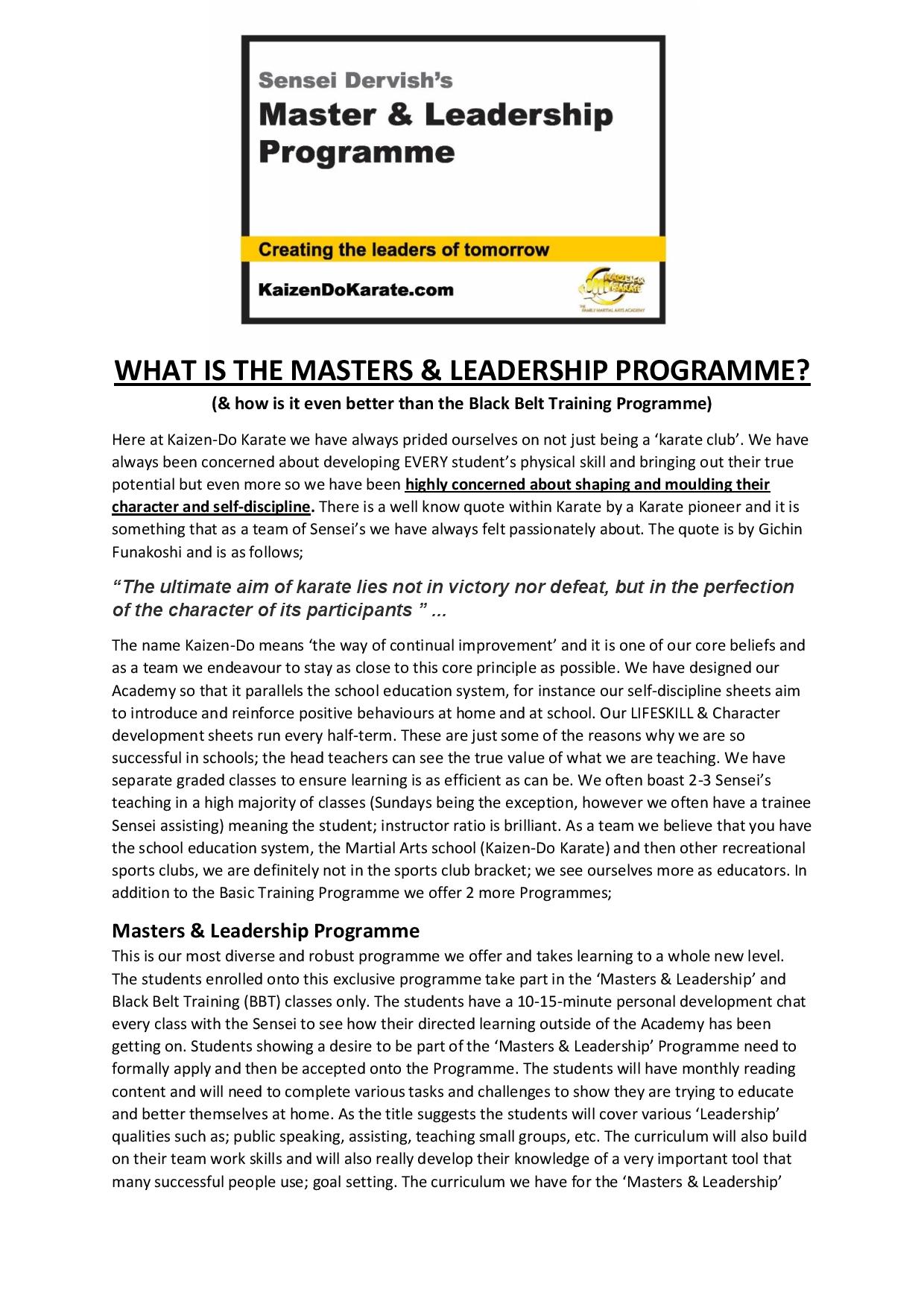 Wow – compare your Basic Training to the Masters& Leadership programme

In addition to the Leadership training there is also an extensive reading list, all of which aimed at making our Masters & Leadership students the best version of themselves. Reading these books will improve every students outlook on life and provide them with brilliant foundations to live a successful and fulfilling life. Our ‘Masters & Leadership’ Programme is an EXCELLENT investment into any student’s future. Do not worry though if you or your child are not ‘readers’ – our Sensei’s deliver the curriculum in a way that caters for all learning styles.

Make Your Bed: Small things that can change your life… and maybe the world

Maximum Achievement: Strategies and Skills That Will Unlock Your Hidden Powers to Succeed

What to say when you talk to yourself

How to Win Friends and Influence people

21 Ways to Manage your Time

Way of the Warrior Kid

No Excuses!: The Power of Self-Discipline

The Psychology of Winning

Committing to becoming a Black Belt is the first step on achieving your Black Belt goal. We want committed students and families on our Masters& Leadership programme. Commitment is what makes things happen – without commitment nothing ‘worthwhile’ happens.The below quote is from W. H. Murray a famous mountaineer and Himalayan expedition leader

“Until one is committed, there is hesitancy, the chance to draw back, always ineffectiveness. Concerning all acts of initiative (and creation), there is one elementary truth, the ignorance of which kills countless ideas and splendid plans: that the moment one definitely commits oneself, then Providence moves too. All sorts of things occur to help one that would never otherwise have occurred. A whole stream of events issues from the decision, raising in one’s favour all manner of unforeseen incidents and meetings and material assistance, which no man could have dreamt would have come his way.”

Here is the application form just in case you did not receive one with your invitation. Please download, print off and complete, then hand back to Sensei Dervish at the School.

Achieving a Black Belt at Kaizen-Do Karate will provide your child with so many transferable skills that will help them in MANY areas of their life. They will be more Respectful, show more Perseverance, develop Character, increase Confidence, learn to avoid negative peer pressure – the list of benefits is endless.

Along the 4-year journey (approx.) to Black Belt our structured programmes improve so much more than just physical fitness. Hundreds of families have commented that we drastically improve all the benefits that parents want for their child to be the best version of themselves.

We are NOT a seasonal recreational sport (football, rugby, gymnastics, etc), we are a Martial Arts school. We have designed our Martial Arts School so it parallels the school education system and you will notice this throughout your LIFESKILL journey to Black Belt and beyond.

We are not a Karate ‘club’ we are a Martial Arts School whose aim is to improve EVERY one of our students lives. Becoming a Black Belt will help our students to be the best version of themselves they can be. Our Black Belts are proactive students.

Training to Black Belt improves so many skills that are transferable to everyday life, being a Black Belt opens so many doors. If you qualify to enrol on one of our Black Belt programmes, I look forward to working with you for many years on your journey to Black Belt 2nd Dan and beyond

Still not convinced it is the best thing you could do. Read this ‘What Kaizen-Do Karate has done for me’

What Kaizen-Do Karate has done for me; Cody Brine – a junior member 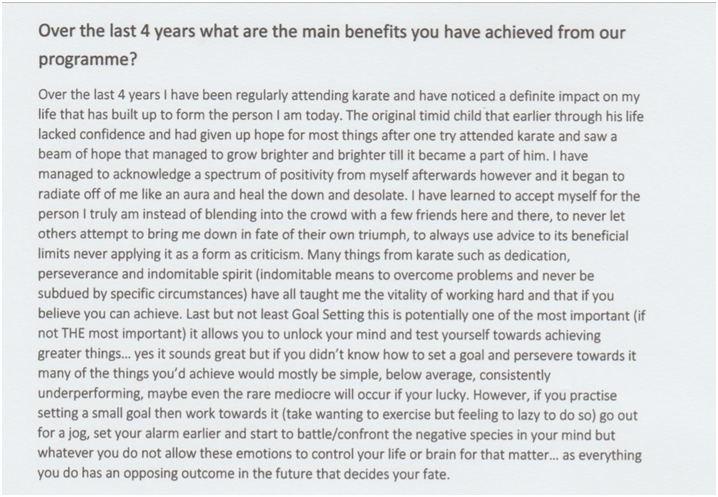 Here is the application form again. Please download, print off and complete, then hand back to Sensei Dervish at the School. Enrolling your child or your family onto the Masters & Leadership programme will best one of the best investments you have ever made.